Ross joined OBE in February 2015 to fill livestock co-ordinator and producer liaison roles. Ross grew up on a sheep and cattle property west of Eromanga in the Channel Country and was an original participant in discussions that led to the formation of OBE Organic. Ross’s family-owned property, Windula Station, was one of the first holdings to begin organic certification in the far west of Queensland.

Ross’s connection with the remote regions was furthered when he worked with Air Traffic Services including 4 years at Charleville Flight Service with responsibility for the airspace west to the South Australian and Northern Territory borders. Ross’s aviation background also extends to holding a private pilot’s licence.

Since 1998 Ross has been self employed as a business owner and manager including 7 years running a stockfeed milling and cattle feedlot enterprise in the Lockyer Valley, west of Brisbane, where he gained valuable experience in beef cattle nutrition. He also studied externally at the University of New England to gain a Certificate in Rural Science. 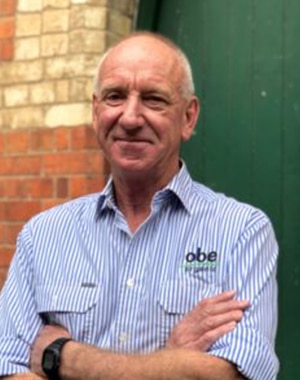