Dalene is OBE Organic’s Managing Director and the company’s longest-serving employee. She began working for OBE Organic in 2004 when the fledgling company employed only two dedicated staff members. In the following years, she has performed practically every role, including a number of years overseeing production at the processing facility. Dalene has unique knowledge of OBE Organic’s business from how the cattle are raised through to how chefs serve our steaks. Dalene’s family is a major producer for OBE Organic and her father David Brook is the company’s chairman. She grew up on the family’s properties in the heart of the Channel Country and has an intimate knowledge of the land and people that make OBE Organic’s beef line a world-beater. Dalene’s familiarity with the Channel Country provides a strong link between OBE Organic’s producers and the OBE Organic administrative and management team and board of directors.

Despite growing up in the wide-open spaces of outback Australia, Dalene fitted comfortably into the densely-packed urban environment of Hong Kong, where she lived with her husband Michael and their three children, for five years to 2015. From Dalene’s position at OBE Organic’s Asian regional headquarters in Central, Hong Kong, she managed the company’s quickly expanding business in that region as well as the Middle East. This base gave her quick and easy access to OBE Organic’s importers in Japan, Korea, Taiwan, Singapore, Malaysia, Indonesia, Kuwait, Lebanon and the United Arab Emirates. She has done extensive travel to all these markets and values the personal and lasting relationships she has built with customers. Prior to moving to Hong Kong, she lived in Beijing for six months, studying Mandarin. Dalene is also fluent in French, speaks Spanish and understands Afrikaans. She has been based in Brisbane since 2015. 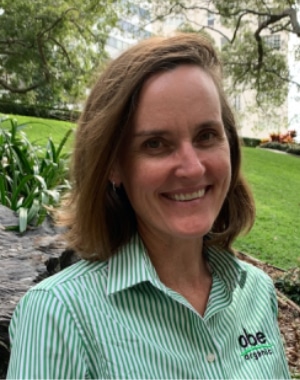 Next Member
David Brook, OAM
We use cookies on our website to give you the most relevant experience by remembering your preferences and repeat visits. By clicking “Accept All”, you consent to the use of ALL the cookies. However, you may visit "Cookie Settings" to provide a controlled consent.
Cookie SettingsAccept All
Manage consent