Challenges are universal for ‘women in agriculture’ 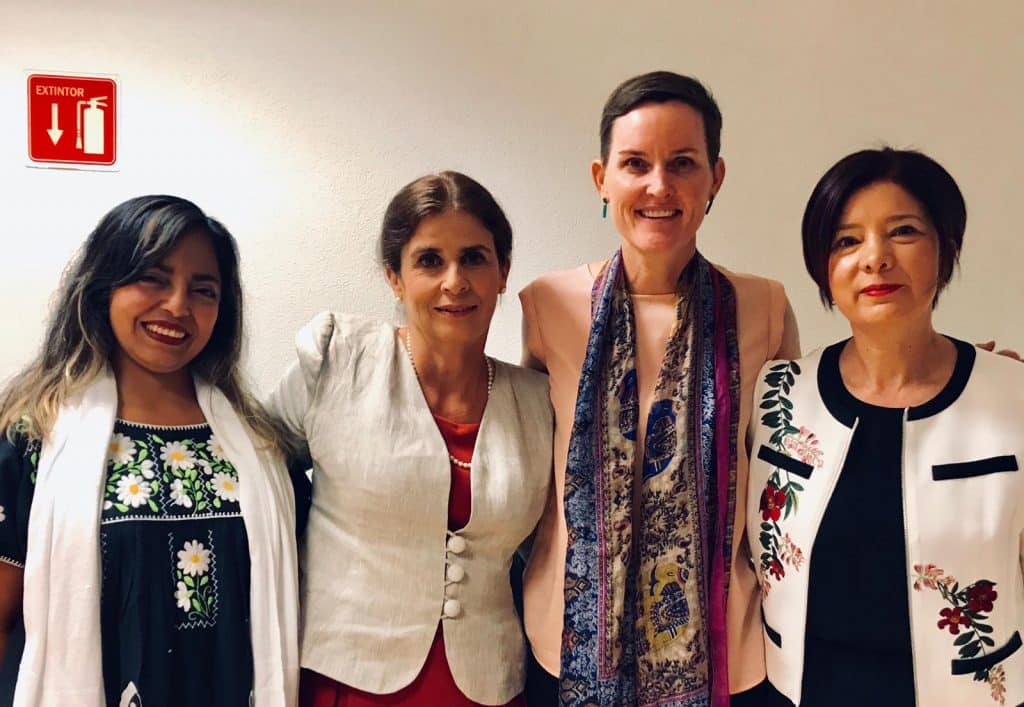 Our Managing Director Dalene Wray has just returned from a visit to Mexico, where she spoke at the World Agrifood Forum #foroglobal2018

While in Mexico City, Dalene was also privileged to join leading Mexican women to speak at a forum on ‘women in agriculture’.  We have long walked the talk on gender equality in agriculture – 60% of our Board and 70% of our staff are currently female – so this was a real thrill.

The Australian Ambassador David Engel also mentioned OBE Organic in his regular column in a local newspaper while promoting agriculture and women in agriculture.  Thank you Ambassador, it’s very pleasing to see you promoting both Australia’s interests and important values like gender equality on the global stage.

The link to the Ambassador’s article is here – or if you’re not fluent in Spanish a “Google Translate” version is below.

Women and agriculture: challenges and experiences in common

This month we celebrate two dates designated by the UN as international days linked to agriculture: International Rural Women’s Day (October 15) and World Food Day (October 16). Both commemorations show that, even when rural women till the land and plant the seeds that feed entire nations, their living conditions are inferior to those of rural men and urban women. Rural women represent 43 percent of the workforce in agriculture, in addition to guaranteeing food security in their communities, however, existing gender inequalities, combined with an economic, technological and environmental environment that changes rapidly, limit the full use of its potential. It is important, then, to recognize the fundamental role and contributions of rural women, including indigenous women, in agricultural and rural development to improve food security. Achieving food security is one of the objectives of World Food Day, and its celebration in 2018, under the theme of this year: “Our actions are our future. A world #HambreCero for 2030 is possible, “will commemorate the 73rd anniversary of the founding of FAO.

Given that 80 percent of the people who suffer extreme poverty in the world live in rural areas, and 60 percent of those who suffer from hunger in the world are women, these two days remind us that there is still much to be done to improve the conditions of life in rural areas, especially women. I am pleased to report that today the Australian Embassy, in collaboration with Sagarpa and FAO, is holding an event called “Women and agriculture: challenges and experiences in common”. Four outstanding women will hold a dialogue on the subject, highlighting their success as entrepreneurs and their role as defenders and promoters of gender equality: Carla Suárez, president of the Mexican Council of Meat and businesswoman in the food industry; María Antonieta Flores, treasur

In Australia, Dalene Wray has been a tireless advocate and advocate for gender equality led by a company in which 66 percent of staff and 50 percent of managers are women. It has also been at the forefront of efforts to promote equal opportunities for indigenous Australians in the spirit, guidelines and actions of the movement called Reconciliation Australia.

Even though Australia and Mexico have taken firm steps to acknowledge the valuable contributions of women to agriculture, in both countries much remains to be done to make gender equality a daily reality for millions of women. The panel of four outstanding and successful businesswomen in the agribusiness sector in Australia and Mexico represents another stage in the mission of generating awareness and inspiring changes. It is also an excellent way to celebrate the 73rd anniversary of FAO, by showing that only by promoting gender equality and diversity will we achieve the goal of “One World #HambreCero”.

Ambassador of Australia in Mexico.