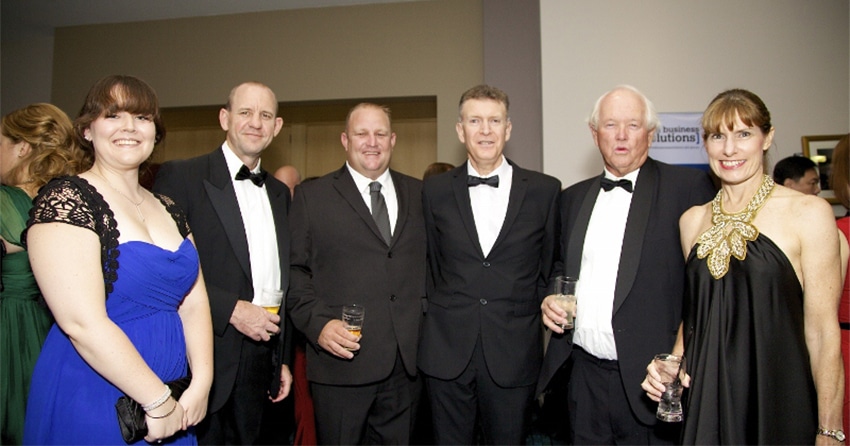 OBE guests at the 2012 HKABA awards, including Mr Scott Minnikin (Stanbroke), 3rd from the left and Ms Barb Kassulke (NAB), standing to the far right.

Ms. Wray, OBE Organic’s longest serving employee, said “I’m so pleased that OBE Organic had a successful night. We are thankful to the Hong Kong Australia Business Association for recognizing the many years of work we’ve put into our mission to bring the powerful benefits of organic beef to consumers around the world.”

OBE Organic director, Scott Fraser said, “We’re very proud to receive the HKABA’s Business Excellence Award, which is testament to the vision the founders had back in the early ‘90s, and professionalism and hard work the OBE producers and team has applied since then. That our GM Dalene Wray, has been been voted the most effective employee of all Queensland companies doing business in Hong Kong and China has energised the whole OBE family!”

Mr. Fraser continued, “With 65% of Australians buying organic in the last year, and more than a million regular Australian consumers of organic products, the important role that organics is playing in our home country is extremely encouraging. With the efforts of the OBE Organic business team, who work alongside Dalene, we’re exporting increasing volumes year on year, and our retailer partners around the world couldn’t be happier with the fantastic taste and healthy qualities of OBE Organic beef.”

‘As a successful exporter in this challenging global environment, you and your staff are leading the way with Australian organic beef exports and setting a strong example to other Queensland businesses. You deserve high recognition for your achievements in the global export market and for your valuable contribution to Queensland’s economy’.

The OBE Organic group was founded in the early 1990s by a far-sighted group of Australian pastoral families which are continuing century-old family traditions. Today, OBE Organic is the world’s oldest, largest and most trustworthy producer of healthy and great-tasting organic beef, from Australia’s Channel Country.

The scale of OBE Organic’s free-range production operation is staggering: together, the families own over seven million hectares of Australia’s best cattle grazing land (70,000 sq.km.)

OBE Organic exports its beef to territories as diverse as Hong Kong, Taiwan, Indonesia, Dubai and the United States.

For interviews and further comments,

HIGH RES PHOTOGRAPHY OF THE AWARDS AND THE OBE ORGANIC LOGO MAY BE DOWNLOADED NOW FROM http://dl.dropbox.com/u/3273447/OBE-ORGANIC-PICS-AND-LOGO.zip