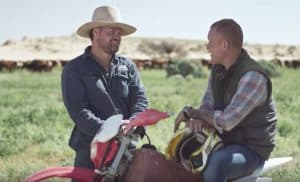 The unique food story behind Australia’s pioneer organic beef company OBE Organic has been recognised in a spectacular new Tourism and Events Queensland (TEQ) video being shown around the world.

In the video MasterChef star Matt Sinclair visits the vast Adria Downs cattle station west of Birdsville, which is home to thousands of free roaming Hereford cattle and is just one of the outback properties that supply OBE Organic.

The footage showcases the amazing diversity of seasonal grasses, herbs and succulents outback cattle graze on, which translates into OBE Organic grass fed beef that captures the real flavour of Australia.

With 70,000 YouTube views already, consumers are showing they want to see where their food comes from.

OBE Organic Managing Director Dalene Wray said with consumers increasingly wanting to know where their food comes from, the uniquely Australian story behind OBE Organic beef is resonating around the world.

“OBE Organic beef is a product that literally can’t come from anywhere else in the world,” Dalene said.

“Our cattle are raised in a naturally pure environment, they feed on an incredibly diverse range of native pastures, and they are managed in a certified organic production system.

“All of that adds up to beef that has been raised by artisan farmers with minimal human intervention to capture the essence of our ancient land, just like the best winemakers work with terroir to impart unique characteristics to their wine.

Fourth generation Birdsville grazier Anthony Brook hosted the Tourism and Events Queensland team and explained how the vast, remote properties of the Australian outback have been virtually untouched by chemicals and pesticides for millions of years.

“People say, ‘what did you have to do to become organic?’ Well we didn’t do anything, we were always that way,” Anthony said.

The OBE Organic video is part of a new TEQ Taste the State tourism campaign promoting Queensland’s world-class food and culinary offerings to the rest of the country and around the world.

OBE Organic beef is sold at selected outlet in Australia, as well as in the Americas, Asia and the Middle East.