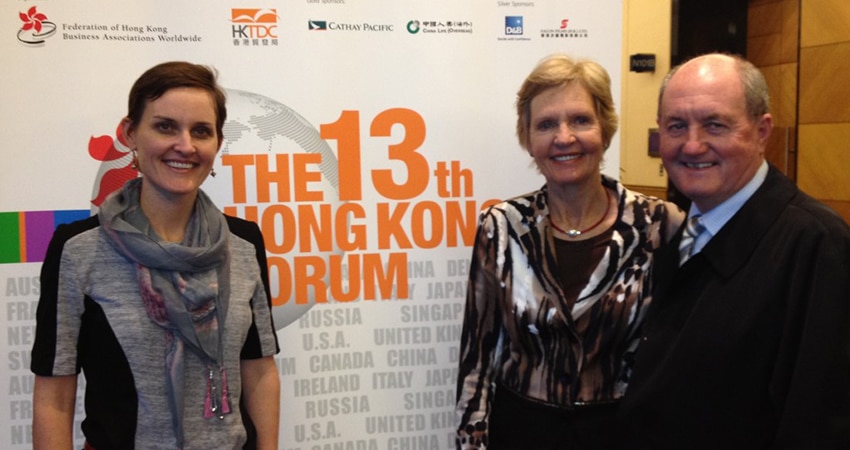 Here is a photo of our General Manager, Dalene Wray with OBE Chairman David Brook and his wife Nell, who attended the 13th Hong Kong Forum in Hong Kong in December 2012.

I was asked to speak at a thematic workshop during the 13th Hong Kong Forum held on the 4th December 2012, in Hong Kong. The Forum is an inspirational conference, seminar and networking event, which aims to help expand business opportunities in Asia.

The Hong Kong Forum is the brainchild of the Federation of Hong Kong Business Associations Worldwide.

I spoke during the Concurrent Workshop 2, titled ‘Flying High in Hong Kong’. I was asked to share my experiences of starting a business in Hong Kong, why OBE chose Hong Kong to set up a Regional Headquarters and to share my personal story and future plans.

I shared the speaker’s table with Mr Ian Richardson, Managing Director of SEKO Logistics and Mr Simon Galpin, Director General of InvestHK. SEKO Worldwide is a personalized global freight transportation and logistics provider. InvestHK promotes inward investment by providing assistance to corporations looking for investment opportunities in Hong Kong. Joining me at the conference was OBE Chairman, David Brook and his wife Nell from Birdsville in outback, Australia.

Here is a transcript of my presentation:

When I was in primary school, I lived in what is called Australia’s most remote town, a place known as Birdsville, with a population of one hundred. We had no television and no phone. The town could be cut off for months at a time when it rained. I’m not even forty yet, so it wasn’t that long ago! Out of my apartment in Hong Kong’s Mid Levels, I can see more people than I would be likely to see in a year in Birdsville. What I can’t see is wide open spaces, spectacular sunsets, sand dunes and any sign of nature. In short, there aren’t too many more places on earth that are more different from Birdsville or Hong Kong, but both of them are vital for making our business work.

We started this company twenty years ago to raise organic livestock where I grew up. It is in a region of Australia known as the Channel Country grasslands. We now export organic beef produced in this region, through-out the world, to markets including the USA, Asia and the Middle East. We set up a branch office in Hong Kong last year and we are currently going through the long process of cracking the Chinese market. I live here with my husband and two year old daughter, Ella. I commute regularly from my home in Hong Kong, to the Middle East, the United States, throughout Asia and to Australia.

When I started working with the company, we had a few customers in the USA and one in Japan. One of my key roles was to develop a bigger presence in Asia. It was a pretty daunting task, because at that stage, I knew very little about the region. I had spent the preceding five years in Europe and all my life in Australia before that.

What I quickly realised is that doing business in Asia is unique. Sure, everyone likes making money here as much as they do in the US or Europe or Australia, but the style of doing business has a flavour all of its own. The Hong Konger’s that I’ve met seem less interested in making money quickly and more interested in making lots of it! The thinking is not on the deal at hand but rather on building a partnership that can be beneficial over the long run.

After a few years of shuttling back and forth between Australia and our growing network of Asian customers, our company decided we would be best served by putting someone into the market permanently. At the time we hadn’t decided on which place would be the best. After discovering how easy doing business was in Hong Kong, where it seemed that a welcome mat was practically being laid out for anyone who wanted to do business, we decided to set-up here.

As soon as I moved here, I noticed a change in the way our customers perceived OBE. They could see that we were truly engaged in the region and that I was making an effort. It showed commitment and that I wasn’t just moving through the region en-route to some-where else.

Despite what you might think, the life of most expats in Hong Kong isn’t as glamorous as drinking with the titans of industry or helicopter flights to Macau. On one of my first visits to the accountants here, they asked me what my salary would be. When I told them, they paused a while and asked me the same question again. They thought I hadn’t heard correctly or that I had miscalculated the conversion from AUD to HKD. When I repeated the same answer, they laughed and said, ‘You can’t live in Hong Kong on that salary!’.

Living here, helps me to understand our customers better. As an example, we have a fully-cooked,organic meatball (like the ones that you buy from IKEA) which are ranged in around forty Park N Shop retail outlets in Hong Kong. You simply reheat them in the oven or microwave, and serve with your favourite spaghetti sauce. To launch our meatballs in Hong Kong, we simply took the same little pack that was already selling well in the USA and placed it here, same packaging and all.

A few years later, someone mentioned to me that they reheat them by boiling or steaming them. I was a little shocked. I had only ever reheated them in the microwave or oven and for that matter, the reheating instructions on the back of the pack made no mention of alternate reheating methods. When I questioned why she would do something strange like boiling the meatballs to reheat them, she swiftly reminded me that no-one has ovens in Hong Kong, not everyone has microwaves, but everyone has two hotplates with which to prepare food on. How ignorant of me!

Like any place you are thinking of moving to or setting up a business, you can probably find plenty of reasons to talk yourself out of it. Whenever I go back to Australia, friends always ask me about the rumoured high costs of rent, schools, health care, food, raising kids and the pollution.

It is impossible to argue with them that the air in Hong Kong in clean, that there is lots of space for our children to run around or that the rent is cheap. Instead, let’s look at the positives;

• You don’t need a car and the city is easy to get around.

• There is lots of business conducted in a very small area, so you don’t waste time travelling.

• You can eat a three course lunch with coffee for less than it costs to make the same meal at home.

• Beyond the skyscrapers, Hong Kong is full of recreation areas.

I believe that there is a misconception that although your company will benefit from an office in Hong Kong, either you or your employees will be personally worse off by moving to Hong Kong. If they have families, you worry about relocating them and how their children will cope with the move and adapting to new schools. That they will somehow be deprived of the many things which we all take for granted.

Why do we think that giving birth in Hong Kong is ‘really expensive’ when compared to our own country? Last time I gave birth, it was in Adelaide, Australia, and it cost us an arm and leg and it hurt (literally). I could have chosen to give birth in a public hospital, but we paid top dollar for a private obstetrician. You can give birth in the equivalent of a five star hotel in Hong Kong, but luckily, you can also give birth for free (but alas not pain free!!) – you have a choice. Choosing private health care is expensive, no matter which city you live in, in the world.

Why do we think that children with learning difficulties wont be accommodated here, or that our children wont have access to the ‘right’ education, like they did at home?

For all the negatives that anyone throws at me about this city, I bet I can counter with a positive.

If I had a child with learning difficulties, I would hire a helper from the Philippines with a University Degree in Early Childhood Development majoring in Learning Difficulties and I would ensure that my child received ‘better’ care here in Hong Kong, than she would in my home country.

As I travel around the world, I am eternally grateful that my husband and I have the opportunity to raise our daughter up in Hong Kong. Our hope is that by the time we leave, she will be fluent in Mandarin and that one skill is what will set her up for life. I believe that the ability to communicate in Mandarin will become as important as the ability to speak English.

From a business point of view, I am grateful to be on the doorstep of China but not living in it. You hear many stereotypes about China. You can say whatever you want about it, that it is dirty, polluted and even corrupt. That is beside the point. Living and doing business there is really tough.

If any place understands China it is Hong Kong. In the future, I believe that money will continue to buy influence, but if you are an SME and don’t have it, the next best thing is local experience. Companies with a physical presence in the Hong Kong market and those who invest time in developing local relationships are more likely to be successful and generate new business opportunities here and in Mainland China.