From Dawn to Dusk – Mustering Cattle on Cordillo Downs 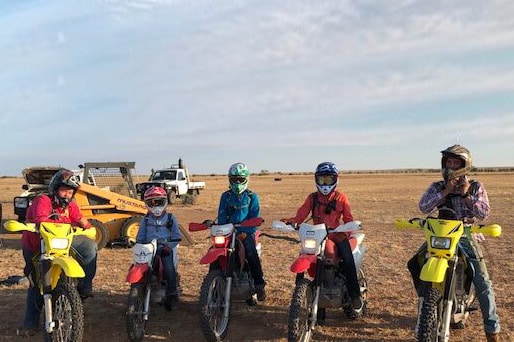 In this article we hear from Janet Brook, one of OBE Organic’s cattle suppliers, about what goes into producing OBE Organic grass-fed beef. Janet and Anthony Brook manage Cordillo Downs, a 780,000-hectare, certified organic cattle station in the north east corner of South Australia. 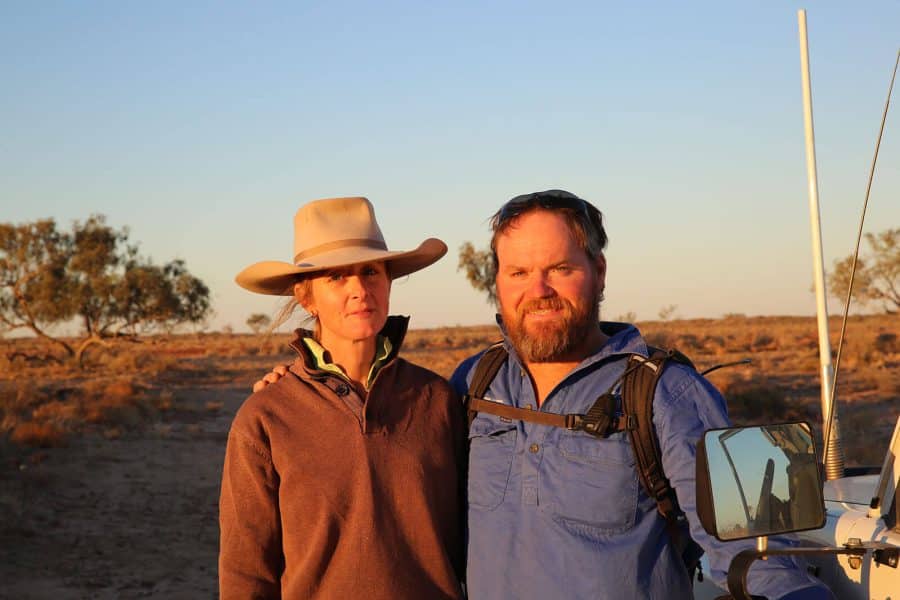 Have you ever wondered what it takes for your OBE Organic Rib Eye to make its way onto your BBQ?

Do you conjure up images such as those provoked by Banjo Paterson’s ‘Clancy of the Overflow’ or the TV series ‘Outback Wrangler’ with Matt Wright?

In this piece I will look at one component – a day of mustering.  The dictionary has the definition – to assemble or collect – and while that is close, there is often a lot more to it.

Anthony and I run a beef cattle operation in the far north east corner of South Australia. 180km north of Innamincka and 245km south east of Birdsville.

Cordillo Downs has some history behind it – the Beltana Pastoral Company took up the lease in 1883, initially producing wool before the property was turned over to cattle production in the 1940’s.  You may have seen pictures of the Cordillo Downs Woolshed with its notable construction of a curved roof and stone walls. 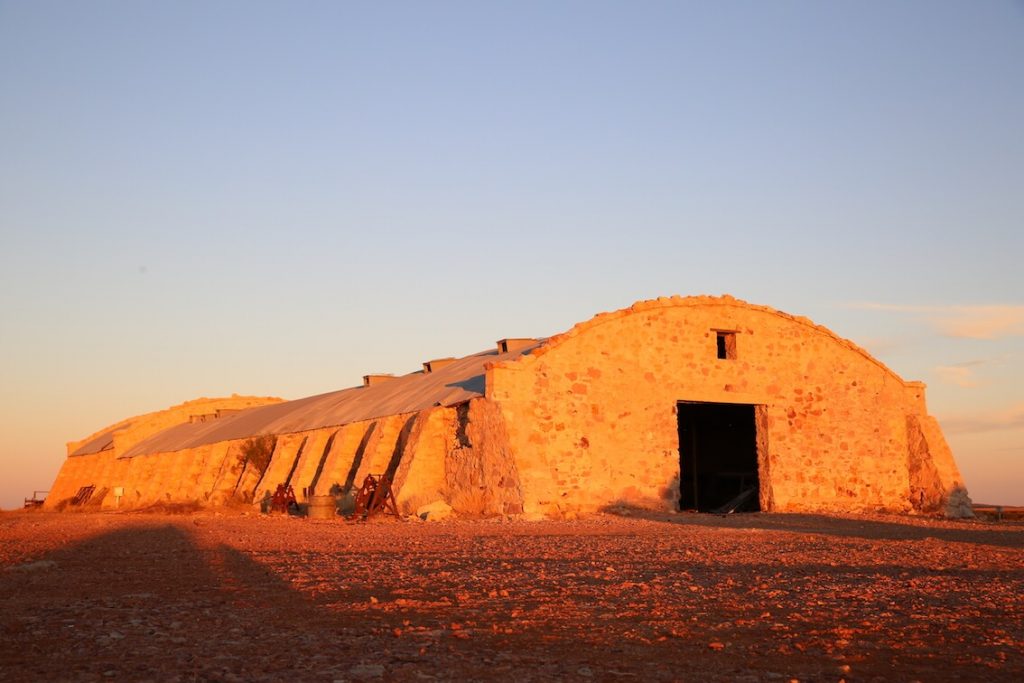 Back in those days, horses (and less known – donkeys and mules), were the order of the day to muster the cattle.  These days, we use motorbikes and a plane. Anthony pilots a Cessna 182 (a light aircraft) which is used to spot the cattle, while the motorbikes do the ground work.

It is difficult to relay how much stockmanship goes into a day of mustering.  We collect the cattle over a large area and walk them quite large distances – all within the cattle’s capability – but it does need experience and judgement to do the job well.  Our cattle are usually only mustered once or twice a year and we have no paddocks on Cordillo Downs, so they are essentially ‘free range’.  Our cattle are not wild, but they are not like a dairy herd either, so this is another case of requiring a high level of stockmanship to handle the cattle well.

I have put together an outline of a typical day of mustering – although in reality there is no such thing as typical day.  Some parts Banjo Paterson would instantly recognise and others are most definitely more 21st century.

Before we leave the homestead: 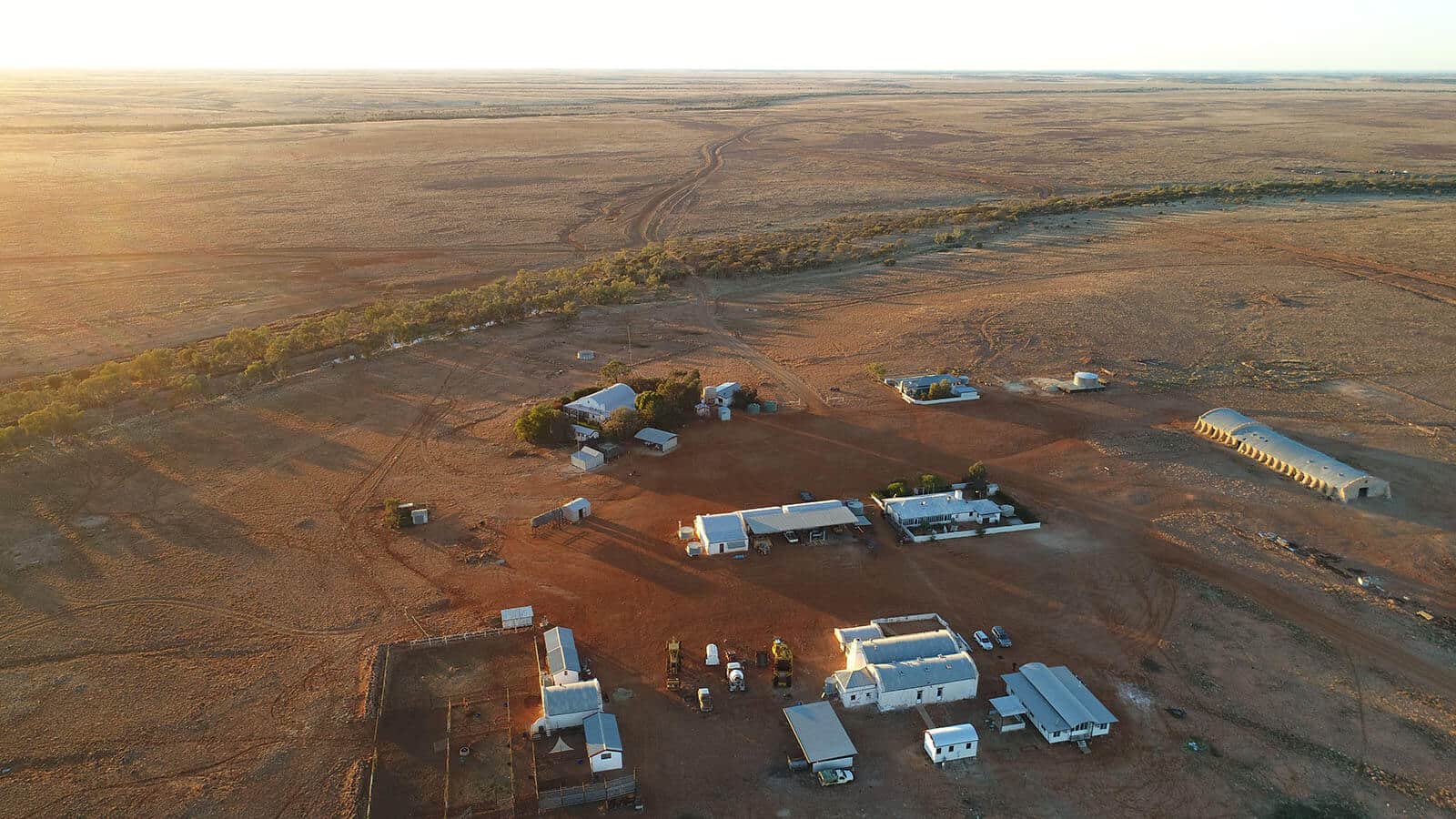 As the property is large (780,000 hectares) we don’t come home every night – we ‘camp out’ in the ‘stock camp’.  So, before we head out to camp, decisions need to be made (by Anthony) on where we will muster next.  Once that decision is made, the gear needs to be organised.

This gear is then loaded onto utes, trailers and our camp truck. With everything organised and packed, we are now self-sufficient for the week and ready to depart.

The day before mustering – out to camp:

Our stock camps are located at one of our trucking yards.  We have 13 sets of trucking yards and one of these locations will be the goal for each muster.  These yards can be anything from ½ an hour or 2 hours from the Cordillo Downs homestead, so we usually head out the night before.

When we arrive to the chosen location, the swags and camp truck are set up, bikes unloaded and dinner organised.  A combination of prepared meals and uncooked meat is taken out.  All perishables are kept in the camp fridge.  Anthony flies out to camp and lands nearby – he has airstrips at most of the yards.

*What are trucking yards? Trucking yards are basic cattle handling facilities used primarily to hold cattle after mustering to allow drafting and loading onto trucks. This is the point that many vital checks are done to ensure that animals are fit to load.

*What is a swag?   A swag is a waterproof canvas sleeping compartment that is sometimes insect-proof. Swags can come with a foam mattress and can comfortably be slept in with the addition of a pillow. They are sturdy, easy to erect and packing up can be done quickly. They are also equipped to allow the cattle to be fed and watered.

The day starts with breakfast.  Usually left overs from the night before (stew, steak in gravy etc) heated up on the fire in the camp oven.  Someone is nominated to do the breakfast each day and they start a half hour earlier to warm the food up and boil the billy.

Next, we get ready and instructions are handed out. The lunch esky – a type of ‘portable cooler’ – is packed (corned meat, cheese and bread – don’t forget the biscuits!).  Bikes are fuelled and checked for oil and water.  Radios and helmets are put on.

Anthony gives directions about where we will start the muster before he checks his plane over, fuels up and takes off to start spotting cattle.

Anthony finds the cattle from the air and sends for individual bike riders to collect those cattle.  These smaller mobs are gradually brought together into one ‘main mob’.  All communication is by UHF radios – all vehicles have one including the plane and the bike riders have portable versions.

The time for smoko changes depending on where the cattle are and how long it has taken to get them into the main mob.  Sometimes we combine smoko and lunch – on Cordillo Downs we call this SMUNCH (a word coined by our daughter).

The mob of cattle are pulled up to rest and so do the people.  It is a chance to have a small snack, swap stories about the morning, and refuel the bikes.  Biscuits are the main stay but sometimes we take out everyone’s favourite chocolate cake.

After about half an hour it is time to head back out, move the main mob along and for Anthony to take to the skies again.  On Anthony’s instruction the bike riders are sent off again to collect more cattle to be brought into the main mob as we walk the cattle towards the yards.

*What is ‘Smoko’? ‘Smoko’ is a slang term used in Australia and New Zealand to describe a short work break. As its name suggests, it was traditionally attributed to smokers – though in contemporary times, the term is used in a generic manner as much as it is in the traditional form.

Again, as with smoko, the timing of lunch depends on where we are in relation to the yards, which mobs are to be brought into the main mob, if the cattle need resting and what cattle are between us and the yards.

A good shady tree is picked out to park the car under – usually a position in front of the cattle to provide a vantage point to watch the main mob.  The cattle are pulled up in a spot that gives them the option of finding some shade and some grass so they can have a feed as well.   A fire is lit to boil the billies and the lunch materials set up.

There are no yards or fences to hold the cattle so usually one person stays on their bike with the mob while the others go for lunch.  Lunch is generally a longer break than smoko.  The cattle are given a good spell – time to have a feed and for the calves to be fed by their mothers.

Once the cattle and the people had had their lunch, we continue with the same – walking the mob along, collecting cattle as we go along towards the yards.  Sometimes not all the team are needed to walk the mob along and are sent off to do other tasks – grading roads, checking fences, preparing the yards etc.

Some musters go from dawn to dusk and some not so long depending on where the cattle are on the day in relation to the yards.  Cordillo Downs is not divided up into paddocks so the cattle have the free range of the property.  Having said that, cattle range only so far from water, favour particular areas, and regularly move themselves to fresh pasture.  This means that no one muster is the same and this is where the aeroplane is extremely useful for spotting the cattle, saving a lot of time on the ground.

Once our goal is reached – the yards – the cattle are ‘yarded up’.  Once yarded they are left to rest overnight which gives time for the calves to mother up and for the mob to water and rest.

Once the cattle are in the yards the work is done for the day.  Attention turns to preparing the evening meal and showers (yes, we have showers).  The preparation of the evening meal is a team activity.  Someone peels the potatoes, someone stokes the fire, someone cooks the steak.

After dinner, there is small talk and story swapping in front of the fire, under the stars before settling down for the night in our swags.  Something Banjo Paterson and Matt Wright would both be familiar with.