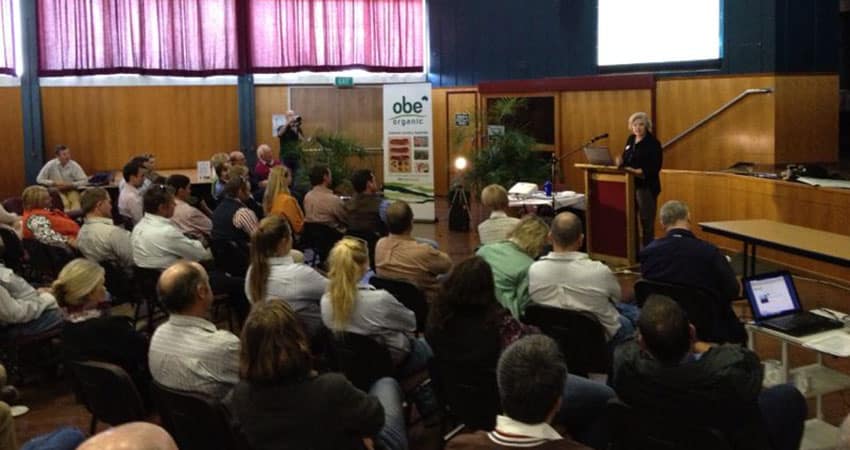 OBE Organic recently hosted its first Innovation Forum for Australian beef producers. In hopes of attracting more producers of organic beef to meet the growing demand globally, OBE chose to hold the Forum at the Longreach Civic & Cultural Centre in Longreach, Queensland, an area with a large number of beef producers. The Forum brought together over 50 participants – primarily cattle farmers interested in organic production, some traveling several hundred kilometers to attend.

As one of Australia’s oldest and largest producers of certified organic beef, OBE is experiencing an increase in demand from among its export markets, primarily Asia (see a recent article featuring OBE in The Australian: http://bit.ly/1ptOYk5). The growing team at OBE, and its network of family farmers, are eager to continue meeting that demand by bringing on more farmers to produce its organic beef.

Speakers at the Forum were made up of a variety of business backgrounds, offering expertise not only on converting to organic beef production, but also non-traditional topics such as managing human resources and data analysis for managing more effective family farms. To see a complete list of speakers and the topics addressed, see our previous event blog post here.

During the daylong Forum, OBE presented its new company mission statement, “to provide safe food to families of the world,” and emphasized its need for more suppliers to join them on their journey. The OBE team also took the opportunity to highlight its commitment to having a relationship with its consumers across the world online through social media. Despite the limitations that some Australian producers currently have with little access to high speed internet, mobile phone coverage and data, OBE knows that those same producers do appreciate being part of a innovative and forward-thinking company that values how end-users perceive the OBE brand around the world.

In an effort to reach those not able to attend the Forum in person, OBE shared insights with its global social media community via Twitter using the hashtag, #obeif14. The company also produced a series of videos recapping the event; those can be watched on OBE’s YouTube channel here.

As a result of this Forum, participants received diverse, valuable insight and ideas to better their beef production, and OBE now has many more prospects to source organic beef from. OBE also announced that it is developing a Young Producers Group, which will empower youth with skills to play a significant role in OBE’s future. Stay tuned to our blog as this program develops and contact Dalene Wray if interested in joining, at: dwray@obeorganic.net.