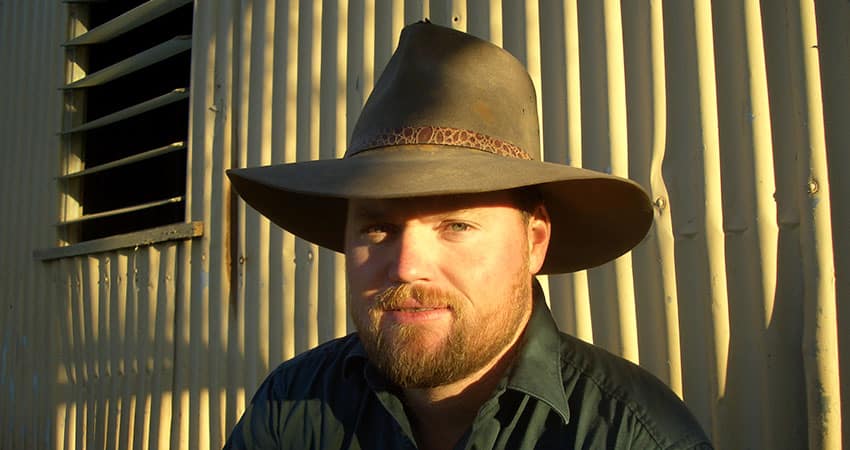 In this video, it is interesting to hear how Anthony collects his groceries in a Cessna 182 aircraft, whereas most people would just drive to the grocery store to do their weekly shopping!

We posed a series of questions to our family farmers and have turned their responses into a short video series titled ‘The people behind OBE Organic’. You’ll learn a little about their love of farming (ranching) and you’ll also hear what they like to do in their spare time.

Anthony Brook lives on “Cordillo Downs Station”, located in central Australia. He and his wife Janet, have four children. Together, they operate organic pastoral properties in the Channel Country area of the Lake Eyre Basin. “Cordillo Downs” is located 1600 kilometres inland from the east coast of Australia.

Anthony has lived in Birdsville or at Cordillo all his life, apart from his senior schooling completed in Adelaide at Sacred Heart College.

His family has farmed their land for over four generations. His maternal great-great-grandparents were married in Birdsville in the late 1880’s. His grandfather Bill Brook, originally from Adelaide, purchased their first property, Adria Downs Station, west of Birdsville, in 1939.

The operation of his family’s organic enterprise is further enhanced through Anthony’s operation of a Cessna 182 aircraft. He is credited with over 1000 hours flying time navigating the outback of Australia as a bush pilot.

Cordillo Downs is in a low rainfall area of Australia, receiving just 160 millimetres per annum. This provides perfect climatic conditions for organic livestock production as the low rainfall does not allow disease and pests to thrive. The floodwaters which travel slowly down through the inland river systems of the Channel Country provide nourishment for the organic pastures.

Anthony has travelled extensively both domestically and internationally including to Asia to promote and market OBE organic beef.

He remembers fifteen years ago when OBE sent its first line of cattle to market, destined for Japan;

“I remember standing in the cattle yards. We were loading our first shipment of OBE cattle on the trucks. We never realized back then that ten years later we would be exporting our organic beef all over the world”.